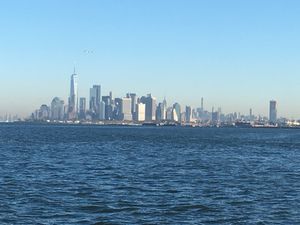 i was playing a concert at anna's jazz island in berkeley some years ago - a great venue that is now closed. i knew anna was married to taj but didn't expect he would be in attendance. when i went to the bathroom between sets i looked over from my urinal and there he was, taking a piss right next to me. i said something like, wow, you're taj mahal. and that nat'l blues was one of my favorite records. he smiled and said something like, thanks. you sound good, man. i was pretty nervous before the next set but i could see the crowd well when we started again and he had left. i'm glad i didn't know he was there!!

it's ironic that the stones track should follow the taj track. is it really random, the shuffle algorithm? because i could hardly stand to listen to their half-assed, british, white-boy version of the blues after listening to taj. they redeemed themselves right away, though, with 'some girls.' that is their shit and i love it. someone gave me a lot of stones records back when i didn’t even know how to get music on my computer. dude was like, hey, i have some stuff from my library i can put on there. i think i literally brought my computer over to his apartment so i could hook it up to his computer - that’s how long ago it was. i really do love the stones but when they sucked, they sucked. fortunately, he didn’t give me under cover or dirty work.

duke and pj. not as different as you might think. i see duke as sort of a minimalist when it comes to playing the piano - never an extra note, exactly what’s needed. i saw pj harvey once and it was one of the most suspenseful spectacles i’ve witnessed. every song sounded like an extended intro and that the drums were going to come charging in at the top of the next verse or chorus. but they never did. or rarely. she created this sense of expectation that made you sit on the edge of your seat waiting for what never came. it kind of blew my mind. duke is like that. you wait for the flash, the crash, the chops and it never happens. instead, it’s the most restrained, elegant presentation. i see a similarity.

since bowie’s death, i’ve come to appreciate his albums w eno. it’s now some of my fave bowie. so great to get turned on to music you thought you knew all about already. maybe i just enjoy ambient music now in a way i was unable to in my youthful clatter. those couple of bowie records lead me to go back to music for airports and other eno of that period. i thought it was ridiculous at the time. now i really like it.

i mite have to do something about this satie business. he seems to come up every other playlist. i have all of his piano music in my library and if you didn’t know, dude was a master of brevity. so there are like 75 piano pieces, most of them not longer than a couple of minutes. i guess that’s not so bad. they are short and i like listening to them. but why do the names have to be so damn long?