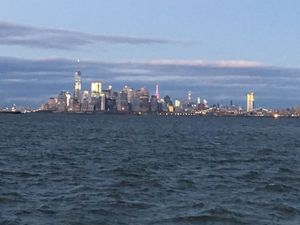 i was playing with richard julian at the old living room on the corner of allen and stanton and carol lipnik was on before us. she was so weird and amazing. her voice was haunting and unique. she played this song just her singing and playing a zither. just a one chord drone of a song but i and the audience were mesmerized. she called her band, spookarama, after the crappy, run-down coney island attraction. i was hooked. she was friends with richard so when we were introduced after his set, i told her she was amazing and could i be in her band. she had just a fiddle player with her and my mind filled with what i could add while i was listening to her set. i knew i would be a perfect fit. she agreed and we became great friends. i produced her record, M.O.T.H.  this is a demo of a song we never recorded. as of this writing carol is at the club, pangea, first sunday of every month showcasing a new set of songs - songs from the tower.

when i first moved to san fran, my favorite band was called, papa's midnite hop. ben goldberg, clarinet. sheldon brown, sax. richard saunders, bass. kenny wollesen. i would become friends with all these guys and got turned on to a lot of music through them. it was through this chordless group that i discovered old and new dreams. another great chordless group in the style of ornette coleman's early music. they only made 2 studio records. this track is from the first of two live albums they did.

graham connah is an old friend of mine from my san fran days - great pianist/composer - and funny. graham is hilarious. he wrote this song about me. here are the lyrics:

i live in terror of a dred named scott

those fidgety, digity chops he’s got

the groove is phat his licks are mack

stay out of the way of his staccato attack

wilbur and jojo followed him out west

all manner of substance they’d ingest

paid a lot of dues back in ohio

he’s the cat with the cat-in-the-hat chapeau

loadin’ up a bowl on the 18th hole

puffin’ on shrub at the up and down club

we dwell in terror of a scott named dred

he’s telling us all small clubs are dead

a man with a formidable plan:

3 more albums in the can

buds are the kinder

sell you an ounce

i hear he’s working on a string quartet

i guarantee you ain’t heard nothing yet

graduated from the sf mime troupe

and giving that phatty a spark

i got into japanese noh music because i saw the rova sax quartet perform with a noh ensemble. there is a rich theater tradition it accompanies, typically, dating to the 7th century. as i understand it, noh music is mostly improvised. the drummers play one note only in their own time. the concert i saw there were three drummers, all sitting. when a drummer’s time came he would slowly raise his hand high in air, sometimes intoning a single note with his voice, then bring his hand down on the drum, whack! then he would sit there motionless till his next moment. at first there is a lot of silence between the events - i don’t know what else to call them - notes? but as the piece progresses the music becomes more dense as each musician decreases the time between strikes. meanwhile, the flute and at the concert, the rovas, would play long tones or bursts of melody. the concert was a fascinating collision of cultures that really worked.

Embed for we are all vampires now