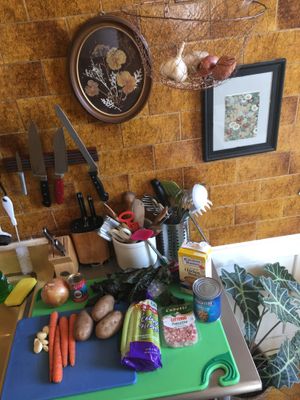 come back to sorrento - carmen mcrae/out of this world

i can see by my last entry i haven't been on the bike in 3 weeks. i can also see when i look at the floor that i have gained 5 pounds over the holidays. i have not been able to get back on the bike because of the cold - i draw the line at 30 degrees - and then it snowed. i thought i might make some of lidia's minestrone and that takes 30-45 minutes. then i thought that's about the same time as a bike ride so what if i put the iphone on shuffle and make the soup?

lidia was walking by the piano awhile back right after i had made it the first time so i told her as much. she stopped to ask how it turned out. i said it was delicious and that i didn't know that step about toasting the tomato paste. she said,
'THAT is where you get the flavor!'

i wanted to include a link to the recipe but the one that comes up doesn't have that step. i distinctly remember:

for several minutes each....

olive oil with the garlic and pancetta

add the potatoes and stir

is the smart phone really that smart? 'come back to sorrento'? first song? granted, it's a jazzy version in english but how did it know? weird.

this goldfrapp album is easily one of my favorite albums in the new millenium. i don't hear much in the pop world i like in the 21st century and it makes me feel old and irrelevant but this record is great. i forget who turned me on to them. i guess you would call it 'down tempo' in the modern sense. but it isn't sparse like portishead. it's at times downright cinematic. it's nice to be able to call music from this genre, 'beautiful.' i never tire of hearing it. i've listened to this record a lot.

ok. this stones track sucks. i never want to hear it again. i went on my computer and deleted it so it will never come up again. i knew that was going to happen eventually with the stones. it's not even funny. if it was funny how bad it is, i could keep it. not funny - horribly, awfully bad.

john cage wrote a famous collection of pieces for prepared piano called, 'sonatas and interludes.' he 'prepared' or altered the sound of the notes by placing screws, plastic pieces, nuts, bolts and rubber stoppers in between the strings of 45 of the notes. i thought it might be cool to do that to the whole piano - all 88 keys - and to really spend some time with each note, seeing if i could make each note a small universe of sound. i left the piano that way for two months, recording improvisations right after i did the modifications and then recording another set of improvisations after the piano had been that way for two months. interestingly, i wound up using about an equal number of takes from each set. in this track, in addition to the stationary preparations, i used a tuning hammer and pressed down on the string itself, sliding it up and down, creating the illusion i am bending the note. 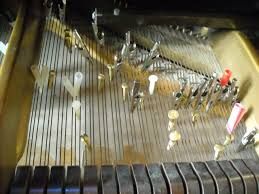 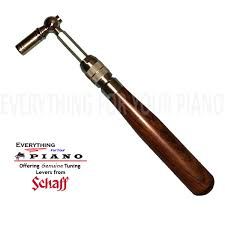 again with the locrasto. i know. i love this record. but in this little bike riding project, i've heard it 3 or 4 times. there are thousands of songs in my cloud. wtf?

love the soundtrack to blade runner. chariots of fire, not so much. some eno had been coming up in this project. i think i mentioned how ambient music doesn't bore me anymore.

my favorite louis armstrong is the hot 5's and 7's. i'm certainly no louis expert but he seems to be playing his horn better and more creatively in this period - especially when you consider the time. i guess i'm like that with chet, too - i'd rather hear him play than sing. although, louis sings on this track. like chet, they began to insist he sing and i cared for them less. louis was the king, though, no doubt. i can't believe i've lived in nyc for almost 20 years and i've never been to his house in queens. shameful. i can say in my defense, though, i have only BEEN to queens 5 times if you don't count the many us opens and laguardia. and i work at the frank sinatra high school for the performing arts a few times a year. other than that....my niece lived in astoria for a little while. i visited her. but queens....wait, jfk's in queens. been there lots. ok. i'm going to go. you can go to queens college nearby his house and check out an enormous archive of him talking shit with his buddies in his study - hours and hours of tapes. got to do it. i'm going to....